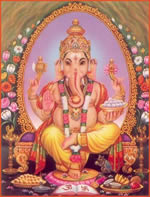 In olden days Ganesh festival was a purely family affair. It was celebrated even during the reigns of Satwahana, Rashtrakuta and Chalukya. There are also references in historical records to similar celebrations during Peshwa times, Lord Ganapati being the family deity of the Peshwas. The celebration would start on the first day of the month of Bhadrapada and would go on for ten days. Years later it became a practice to end the festivities on 'Anant Chaturdashi' with the immersion of the Ganapati idol in water. The celebrations were universally popular with rich and poor alike. The poor were given sweets and clothes. Upper caste Brahmins were fed on delicious meals. On the concluding day, the idol of Lord Ganesh was carried in a beautifully decorated palanquin in a ceremonial procession and taken to the river for immersion.

The last of the Ganesh festivals during the Peshwa regime was celebrated in the year 1815 when Bajirao II held the power. The year 1818 saw the end of Peshwa rule with Union Jack being unfurled on the great Shaniwar-Wada. Among the valuables the Britishers took away was a 'ruby'eyed Ganesh idol made in pure gold studded with diamonds and rubies. After the end of Peshwa rule, from 1818 to 1892 Ganesh Festival remained a family affair in Maharashtra. Emulating the example of Peshwas, princely states of Baroda and Gwalior too involved common people in the Ganesh festival.

Lokmanya Tilak was witness in 1892 where he saw the grand scale on which the festival was celebrated in Gwalior and the enthusiastic participation of people therein. This alone inspired him to make the Ganesh festival a public event in Maharashtra. However it needs to be mentioned here that social and political conditions of those times seemed ripe for making such a move.

Rituals performed during the Festival

During the Ganesha festival, Idol of Lord Ganesha is worshipped in many households. The worship lasts from 1 to 5, 10 or many a times 21 days.

This festival starting with the installation of beautifully engraved (sculptured) Ganesh idols in colorfully decorated homes and mandapas (pendals). The mandapas has been depicted by religious themes or current events. The idols are worshipped with families and friends. An enthusiastic spiritual atmosphere prevails.

The main sweet-dish during the festival is modak, also known as modagam [kozhakottai] in South India and karanjis. A modak is a dumpling made from rice flour/wheat flour with a stuffing of coconut, jaggery and some other condiments. It can be either steam-cooked or fried and the coconut can be fresh/dry grated. A karanji is similar but has the shape of the 4th day moon.

There are also public celebrations of the festival, with local communities (mandals) vying with each other to put up the biggest murti. The festival is the time for a lot of cultural activities like songs, dramas and orchestra.

Today, the Ganesh Festival is not only a popular festival - it has become a very critical and important economic activity for Maharashtra. Many artists, industries, and businesses survive on this mega-event. Ganesh Festival also provides a stage for budding artists to present their art to the public.

Tilak wished to bring about social change for political reasons too. He was convinced that social change was the key to political awareness. The country was under a foreign rule. To achieve the desired result it was necessary to awaken the people and what else would be fit than the already popular Ganesh festival? It is in these circumstances that in 1893 he appealed to the people to make it a festival of masses.

Ganesh Chaturthi is celebrated with great enthusiasm in Maharashtra. People invoke the blessings of Lord Ganesh for prosperity and wisdom and pray for his help in removing all obstacles. Tilak's appeal had a miraculous effect and people responded positively. 1893 saw the beginning of Ganesh festival as a public and popular event with Shri Bhau Rangari, Shri Khajgiwale, and Shri Ghotwadekar in Pune and residents of Keshavji Naik Chawl in Mumbai acting as pioneers.

In 1894 the festival spread to other places throughout Maharashtra. Year after year, the number kept increasing. His writings in Kesari and Maharatta and his public speeches had great influence in making the festival a truly public and participative event.

Festivals unite people. Ganesh festival provided him a necessary platform to arouse them to oppose the reign of terror. His ideas propagated through speeches and writing commanded wide attention forcing the British Govt. to sit up and take notice.

During this period, even 'Kirtans', a form of folk art, a kind of one man chat and musical show, promoting ideas contained in Indian mythology underwent great transformation. In what is now called Rashtriya Kirtan saw the initiation of movement to boycott of foreign made goods, promote the use of swadeshi (indigenous) goods to encourage education based on oriental values and for shunning of alcoholic drinks.

No one can deny the role played by Ganesh festival in mobolising support for the freedom struggle in Maharashtra and elsewhere. It is indeed sad that when India became a free country on 15th August 1947 that Tilak who struggled and suffered throughout his life to achieve this dream did not live to see it happen.